Below is an excellent article about why climate alarmists, such as the 16-year-old girl, Greta Thunberg, have many ideas that will do much more harm than good. The article is long, yet it is worth reading. Be sure to read the Scientific American article that I'll give here: "Should We Chill Out About Global Warming?" This can be found at https://blogs.scientificamerican.com/cross-check/should-we-chill-out-about-global-warming/.

It is unclear to whom exactly she was directing her comments, although she also filed a legal complaint with the UN on Monday, demanding five countries (namely Argentina, Brazil, France, Germany and Turkey) more swiftly adopt larger cuts in carbon emissions. The complaint is legally based on a 1989 agreement, the Convention on the Rights of the Child, under which Thunberg claims the human rights of children are being violated by too-high carbon emissions in the named countries.
Thunberg seems unaware, however, that in poor and developing countries, carbon emissions are more a lifeline to children than they are a threat.

It's one thing to criticize France and Germany for their carbon emissions. Those are relatively wealthy countries where few families are reduced to third-world-style grinding poverty when their governments make energy production — and thus most consumer goods and services — more expensive through carbon-reduction mandates and regulations. But even in the rich world, a drastic cut like that demanded by Thunberg would relegate many households now living on the margins to a life of greatly increased hardship.

That's a price Thunberg is willing to have first-world poor people pay.

But her inclusion of countries like Brazil and Turkey on this list is bizarre and borders on the sadistic — assuming she actually knows about the situation in those places.

While some areas of Brazil and Turkey contain neighborhoods that approach first-world conditions, both countries are still characterized by large populations living in the sorts of poverty that European children could scarcely comprehend.

Winning the War on Poverty with Fossil Fuels

But thanks to industrialization and economic globalization —  countries can and do, climb out of poverty.

In recent decades, countries like Turkey, Malaysia, Brazil, Thailand, and Mexico — once poverty-stricken third-world countries — are now middle-income countries. Moreover, in these countries, most of the population will in the coming decades likely achieve what we considered to be first-world standards of living in the twentieth century.

At least, that's what will happen if people with Thunberg's position don't get their way.

The challenge here arises from the fact that for a middle-income or poor country, cheap energy consumption — made possible overwhelmingly by fossil fuels — is often a proxy for economic growth.

After all, if a country wants to get richer, it has to create things of value. At the lower- and middle- income level, that usually means making things such as vehicles, computers, or other types of machinery. This has certainly been the case in Mexico, Malaysia, and Turkey.

But for countries like these, the only economical way to produce these things is by using fossil fuels.

Thus it is not a coincidence that carbon-emissions growth and economic growth track together. We see this relationship in Malaysia, for example: 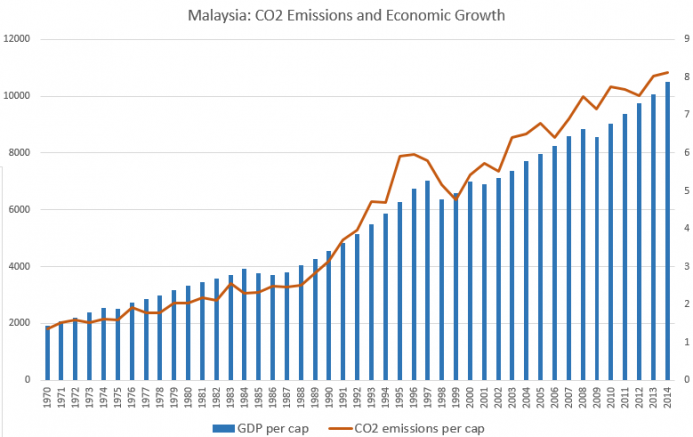 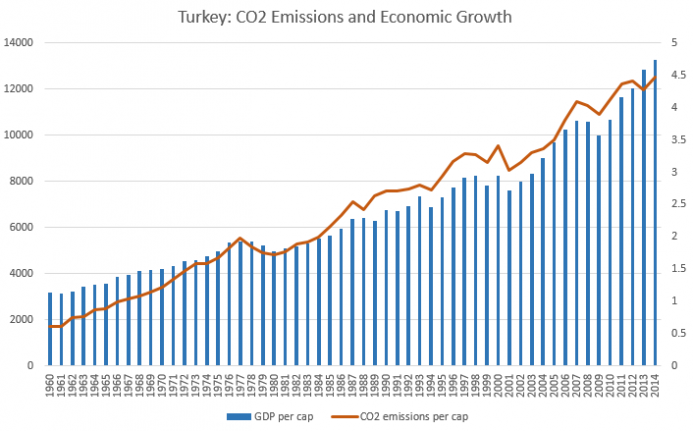 We no longer see this close a relationship between the two factors in wealthy countries. This is due to the fact many first-world (and post-Soviet) countries make broader use of nuclear power, and because high income countries have more heavily abandoned coal in favor of less-carbon intensive fuels like natural gas.

It is thanks to this fossil-fuel powered industrialization over the past thirty years that extreme poverty and other symptoms of economic under-development have been so reduced.

For example, according to the World Bank, worldwide extreme poverty was reduced from 35 percent to 11 percent, from 1990 to 2013. We also find that access to clean water has increased, literacy has increased, and life expectancy has increased — especially in lower-income areas that have been most rapidly industrializing in recent decades. In spite of constant claims of impending doom, global health continues to improve. 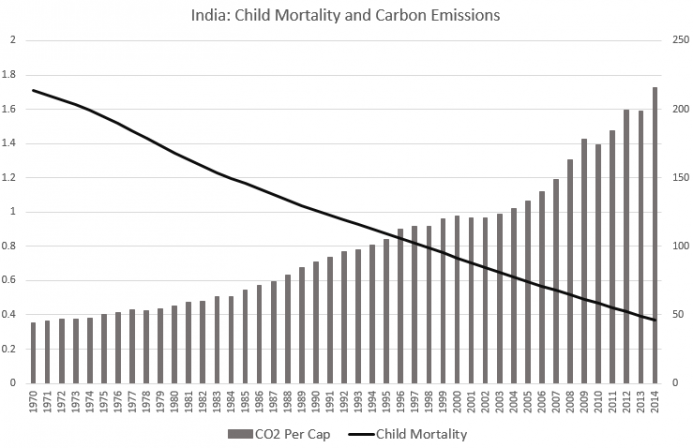 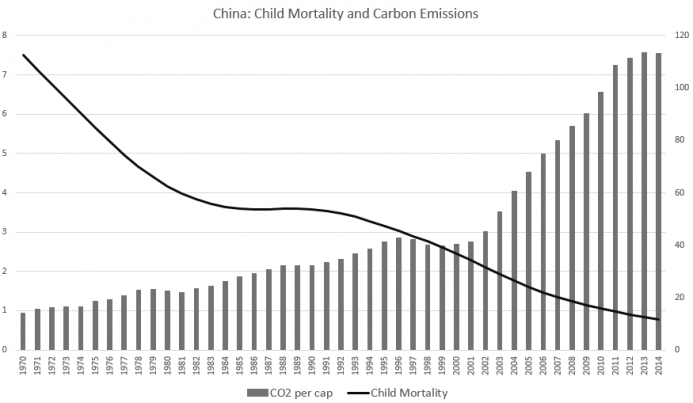 Industrialization isn't the only factor behind reducing child mortality, of course. But it is certainly a major factor. Industrialization sustains modern health care amenities such as climate controlled hospitals, and it increases access to clean water and sanitation systems.

Thunberg, unfortunately, ignores all of this, mocking the idea of economic growth as a "fairytale." But for people in the developing world, money and economic growth — two things Thunberg apparently` thinks are contemptible — translates into a longer and better life. In other words, economic development means happiness for regular people, since, as Ludwig von Mises pointed out, "Most mothers feel happier if their children survive, and most people feel happier without tuberculosis than with it."

Thunberg's blithe disregard for the benefits of economic growth is not uncommon for people from wealthy countries who are already living in an industrialized world built by the fossil fuels of yesteryear. For them, they associate additional economic growth with access to high fashion and luxury cars. But for the billions of human beings living outside these places, fossil-fuel-driven industrialization can be the difference between life and death.

And yet, Greta Thunberg has seen fit to attack countries like Brazil and Turkey for not more enthusiastically cutting off their primary means to quickly deliver a more sanitary, more well-fed, and less deadly way of life for ordinary people.

The Chinese know the benefits of economic growth especially well. A country that was literally starving to death during the 1970s, China rapidly industrialized after abandoning Mao's communism for a system of limited and regulated market capitalism. But even this small market-based lifeline — sustained by fossil fuels — quickly and substantially pulled a billion people out of a tenuous existence previously threatened regularly by famine and economic deprivation.

Today, China is the world's largest carbon emitter — by far — with total carbon emissions double that of the United States. And while the US and the EU have been cutting emissions, China won't even pledge to cap its emissions any time before 2030. (And a pledge doesn't mean it will actually happen.) India meanwhile, more than doubled its carbon emissions between 2000 and 2014, and its prime minister refuses to pledge to cut its coal-fired power generation. 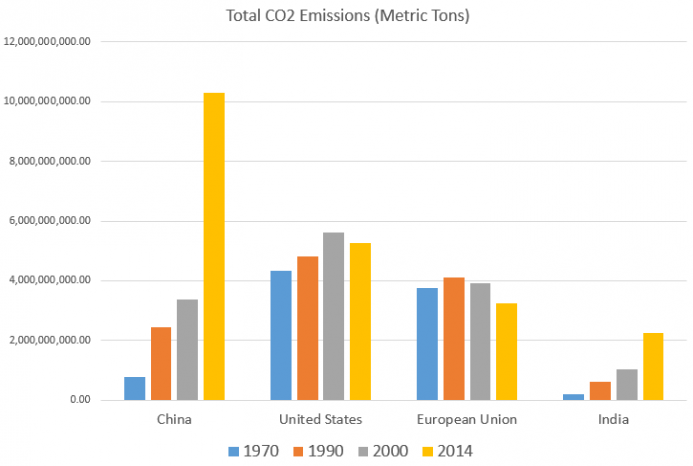 And who can blame these countries? First-world school children may think it's fine to lecture Chinese factory workers about the need to cut back their standard of living, but such comments are likely to fall on deaf ears if climate policy means destroying the so-called "fairytale" of economic growth.

As one Chinese resident said in response to Thunberg on China's social media platform Weibo: “If the economy doesn’t grow, what do us people living in developing countries eat?”

Advocates for drastic cuts in emissions might retort: "even if our policies do make people poorer, they'd be a lot worse off with global warming!"

At the UN, Thunberg thundered, "People are suffering. People are dying [because of climate change.]" But that isolated assertion doesn't tell us what we need to know when it comes to climate-change policy.

The question that does matter is his: if the world implements drastic Thunbergian climate change policies will the policies themselves do more harm than good?

After all, the benefits of cheap energy — most of provided by fossil fuels — are already apparent.

Life expectancy continues to go up — and is expected to keep making the biggest gains in the developing world. Child mortality continues to go down. For the first time in history, the average Chinese peasant isn't forced to scratch out a subsistence-level existence on a rice paddy. Thanks to cheap electricity, women in middle income countries don't have to spend their days cleaning clothes by hand without washing machines. Children don't have to drink cholera-tainted water.

It's easy to sit before a group of wealthy politicians and say "how dare you" for not implementing one's desired climate policy. It might be slightly harder to tell a Bangladeshi tee-shirt factory worker that she's had it too good, and we need to put the brakes on economic growth. For her own good, of course.

And this has been the problem with climate-change policy all along. Although the burden of proof is on them for wanting to coerce billions into their global economic-management scheme, the climate-change activists have never convincingly made the case that the downside of climate change is worse than the downside of crippling industrializing economies.

This is why the activists so commonly rely on over-the-top claims of total global destruction. One need not waste any time on weighing the options if the only choices presented are "do what we want" or "face total global extinction."

But even climate change activists can't agree the Armageddon approach is accurate.  Last year, for example, Scientific American published "Should We Chill Out About Global Warming?" by John Horgan which explores the idea "that continued progress in science and other realms will help us overcome environmental problems." (If click on the link doesn't work, paste the URL: https://blogs.scientificamerican.com/cross-check/should-we-chill-out-about-global-warming/).


Specifically, Horgan looks at two recent writers on the topic, Steven Pinker and Will Boisvert. Neither Pinker nor Boisvert could be said to have libertarian credentials, and neither take the position that there is no climate change. Both assume that climate change will lead to difficulties. Both, however, also conclude that the challenges posed by climate change do not require the presence of a global climate dictatorship. Moreover, human societies are already motivated to do the sorts of things that will be essential in overcoming climate-change challenges that may arise.

That is, pursuing higher standards of living through technological innovation is the key to dealing with climate change.

But that innovation isn't fostered by shaking a finger at Brazilian laborers and telling them to forget about a family car or household appliances or travel at vacation time.

That isn't likely to be a winning strategy outside the world of self-hating first-world suburbanites. It appears many Indians and Brazilians and Chinese are willing to risk the global warming for a chance at experiencing even a small piece of what wealthy first-world climate activists have been enjoying all their lives.

Ryan McMaken (@ryanmcmaken) is a senior editor at the Mises Institute. Send him your article submissions for Mises Wire and The Austrian, but read article guidelines first. Ryan has degrees in economics and political science from the University of Colorado, and was the economist for the Colorado Division of Housing from 2009 to 2014. He is the author of Commie Cowboys: The Bourgeoisie and the Nation-State in the Western Genre.